Many cosmetic ingredients ultimately end their lives in wastewater, sludge (which can subsequently be used as crop fertilizer), and terrestrial environments like landfills. For these reasons the industry is constantly looking for ways to measure environmental impact and carefully select ingredients.

Ecotoxicology is broadly defined as the study of how chemicals interact with organisms in the environment. The environments at risk include marine and freshwater environments, soil, and even the air where respiratory exposures can occur. Ecotoxicity testing is generally divided into the evaluation of acute (short term) and chronic (long-term) exposures. Organisms studied in fresh water and sea water include plankton, algae and corals while the range of terrestrial organisms can be worms and plants, with vertebrate (animal) methods being an undesirable, last resort for the cosmetic and personal care industry. Advances have been made in the use of in vitro methods, quantitative structure-activity relationship (QSAR) models, and read-across approaches where information about similar materials are used to fill data gaps, however there are some situations where these approaches are not sufficient to satisfy regulatory bodies.

Legislative requirements for environmental chemical hazard assessment differ by intended application; whether a chemical is a biocide, agro-chemical, pharmaceutical, or cosmetics and also by possible routes of exposure. Regulations may vary by country and even agencies within a single region which can pose some significant challenges to navigate.  A recent and rather striking example is the request of the European Chemicals Agency (ECHA) for animal data to inform occupational safety in the manufacturing two sunscreen chemicals (not finished consumer goods) which stands in stark opposition to the EU’s  ban on animal testing of ingredients used in cosmetics.

Biodegradability is an additional component of environmental chemical risk assessment related to the potential for bioaccumulation and measures a material’s decomposition into small molecules like carbon dioxide, water, and mineral salts. Regulations such as REACH and the Regulation on Classification, Labelling and Packaging of Substances and Mixtures (CLP), require the assessment of the degradability of cosmetic ingredients. Product certifications like the EU Ecolabel also have biodegradability requirements for organic (meaning molecules containing carbon atoms) cosmetic ingredients.

The degradability of a chemical depends on the structure of that chemical; the ease with which enzymes can break apart the bonds within a molecule and is not tied to whether the material is natural, naturally derived or fully synthetic. For example, squalene is a naturally occurring hydrocarbon that contains six carbon-carbon double bonds which make enzymatic degradation difficult. Squalene can be hydrogenated to form the popular skin care ingredient squalane which is fully saturated (no longer containing double bonds) and biodegrades easily. 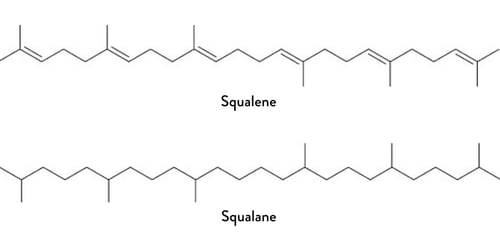 Developed by the Organization for Economic Co-operation and Development (OECD), an international group that establishes evidence-based international standards, OECD 301 is a widely accepted method for biodegradation testing. This is an aerobic biodegradation test that introduces a material to microbes derived from activated sludge, sewage effluents, surface waters and soils, or some mixture of these in a closed environment. The method includes variances based on the nature of the chemical being tested; its water-solubility, volatility, and adsorption characteristics. Fully formulated products can also be evaluated with OECD 301.

A material is considered Readily Biodegradable if 60% (for OECD 301 B-D and F) or 70% (for OECD301 A and E) of degradation is reached within a 10-day window in 28 days. The 10-day window is defined as beginning when 10% of the degradation is achieved and ends after 10 days from this point (but before the 28th day).  A 60-percent pass level may seem low but the test conditions are very difficult. A substance passing an OECD 301 test will likely be fully degraded in the environment where additional factors like pH, heat, and light can accelerate the process. If a sample fails the test, it does not necessarily mean it will not be degraded under more environmentally realistic conditions. Instead, higher tiers of testing like OECD 302 or 303 can be conducted.  OECD 306 utilizes microbes specific to seawater and can be utilized for personal care products like sunscreen.

There are concerns about the environmental impact of several classes of cosmetic ingredients. Let’s take a look at some of the science and misconceptions of a few categories.

Microplastics are defined as small pieces of plastic that are less than five millimeters in length. This includes some cosmetic ingredients like polyethylene terephthalate glitters and polymethyl methacrylate microbeads. While it’s estimated that cosmetics and personal care products only contribute about 1% to total microplastics pollution, the issue is the subject of intense consumer scrutiny as well as regulation in many countries. In the United States the Microbead-Free Waters Act of 2015 prohibited the manufacturing, packaging, and distribution of rinse-off cosmetics (including toothpastes) containing plastic microbeads. Sometimes the term plastic is incorrectly applied to other polymers used in cosmetics.

All plastics are polymers but not all polymers are plastic. For example, hydroxyethyl ethylcellulose, which has use as a thickener and film former, is a naturally derived polymer but certainly not a plastic. And because degradability is dependent on molecular structure, it is not possible to broadly generalize about the category., Each polymer should be evaluated on its own.

Two organic sunscreen active ingredients, oxybenzone and octinoxate, have been banned (unless prescribed by a physician) in the state of Hawaii as well as the country of Thailand and some parts of Mexico in response to studies showing the potential of these ingredients to cause harm in marine ecosystems.  The term “reef safe” doesn’t have an agreed-upon definition, isn’t regulated by any government, and there is no agreed upon test method to substantiate such a claim. While no sunscreen has been proven to be completely reef-friendly, it is believed that those with titanium oxide or zinc oxide, both synthetic inorganic ingredients, are considered to be less harmful. Both of these inorganic sunscreen actives are bright white, opaque pigments which create challenges for an acceptable appearance on darker skin tones. And, unfortunately, testing of inorganic sunscreens by independent consumer organization Consumer Reports over the years has indicated many of these products do not meet claimed SPF and fail to provide optimal UVA protection. These difficulties are all too familiar to cosmetic chemists developing sunscreens and as the overwhelming majority of damage to coral reefs has been attributed to global warming, the choice of sunscreen actives should be carefully considered in light of the serious matter of skin cancer prevention.

When bound to carbon or silicon atoms, fluorine forms extremely strong bonds with unique properties that make these molecules attractive for a wide variety of applications from fire-fighting foams to the Teflon™ tubing, beakers, and bottles used in our laboratories. PFAS are referred to as “forever chemicals” because they can remain in the environment and human body for many years. PFOA (perfluorooctanoic acid) and PFOS (perfluorooctane sulfonic acid) are the most studied substances among the PFAS family but these materials are not used in cosmetics.  PFAS ingredients used in cosmetics include perfluorooctyl triethoxysilane and perfluorononyl dimethicone. These fluorinated silicones are both water and oil (sebum) resistant which contributes to the long wear properties in products like foundation and mascara.

There have been few studies on the presence of PFAS in cosmetics and those that have been published found the concentrations of parts per billion to the hundreds of parts per million range.  On the heels of one such publication in Environmental Science & Technology Letters, The No PFAS in Cosmetics Act was introduced in June 2021 to the United States Senate. The legislation proposed a ban on the use of PFAS chemicals in cosmetics and would require the Food and Drug Administration to propose a rule banning intentional use. Shortly thereafter, the Biden administration announced the Environmental Protection Agency (EPA)’s new PFAS Roadmap that will guide the agency’s current and planned activities into research, restrict, and remediate harmful PFAS. The European Union has also planned action on PFAS, there are several PFAS (such as PFOA) that are already prohibited in cosmetic products (included in Annex II). As the regulatory landscape continues to change and concerned consumers evaluate labels, it’s likely that ingredients with "perfluor” or “polyfluor” in their name will be removed from the formulators’ tool box.

Microplastics, sunscreens, and PFAS are just a few categories where concerns exist regarding biodegradability. And while our focus here was on ingredients, there is certainly interest in the environmental fate of cosmetic packaging and single use or disposable items like make up wipes and sponges. Are there other ingredients or materials you’d like for us to cover in a future piece about ecotoxicity?  We’d love to hear your thoughts, so please leave us a note in the drop box and we might be able to address them in a future post!

Disclaimer: The information provided (on our blog) is accurate to the best of our knowledge, however, there may be errors. As a neutral organization, we at Covalo do not advocate or promote certain products or ingredients on our platform as better than others. The Site may contain (or you may be sent through the Site) links to other websites or content belonging to or originating from third parties or links to websites and features in banners or other advertising. Such external links are not investigated, monitored, or checked for accuracy, adequacy, validity, reliability, availability or completeness by us. For more information on our blog, contact social@covalo.com

Check out COVALO to search, find and compare 35,000+ different ingredients

Covalo makes beauty product development faster and easier by helping you find the right ingredients and partners.
You’re only a few clicks away from finding just what you need.